Well, after several days, we have a new launch date - if all goes well, I'll be in Florida Nov 19-20 to fly on a Zero-G Experimental Flight. These differ from the regular tourist flights in that you get more parabolas (25) and can bring significant equipment onboard.

I had originally planned a simple apparatus (see this earlier entry) but as preparations were made for the flight, it became clear than an enclosed experiment box would be much preferable. So I whipped up a simple setup using MicroRax miniature t-slot. Here's some build photos:

First, here's the general concept. An enclosed box that mounts the Exlim EX-F1 camera and the macrophotography lighting rig. 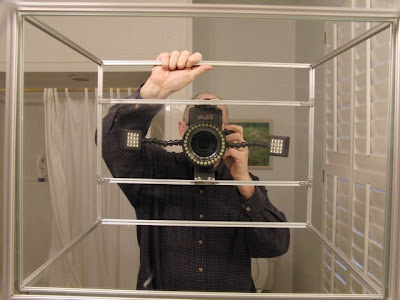 Here are some closeups of the camera mount, a combination of Microrax connectors and old-fashioned bent metal. 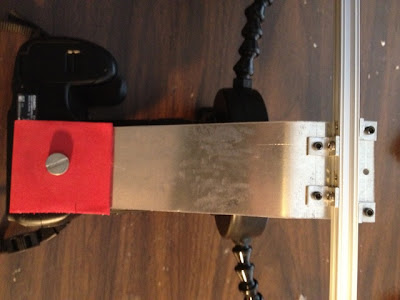 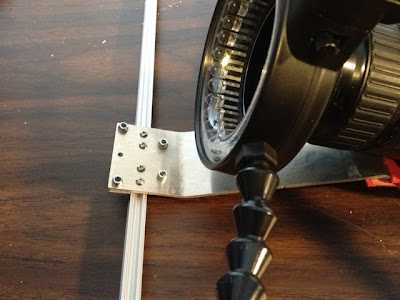 The sides of the box are paneled using TwinWall plastic sheet. It's basically corrugated cardboard, but made out of plastic, and weighs almost nothing. You can find it at Lowes or Home Depot, it's typically found with the Lexan and Acrylic plastic sheets. 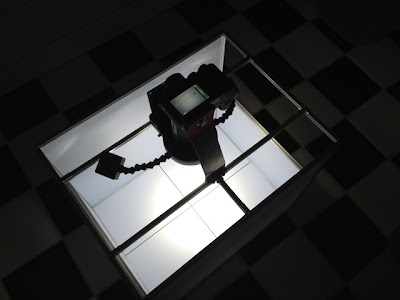 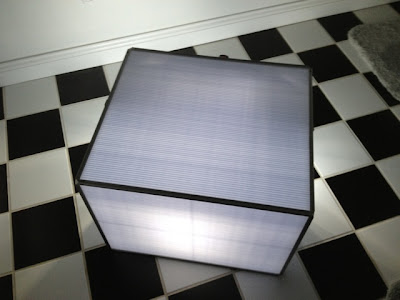 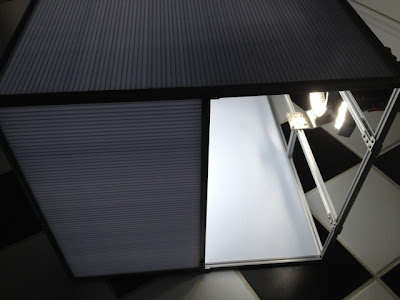 When in use, the open parts of the device are sealed with a glove bag. This attaches to the perimeter of the device with velcro strips, and has built in plastic gloves. You can find these at Lab Supply outlets. I also test-fit some pipe insulation around exposed MicroRax channel to provide a better grip. 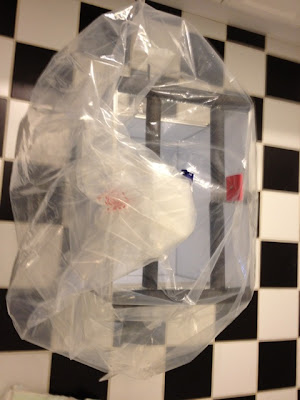 Here you can see the entire device in action. I am holding it with my hand in one of the gloves. 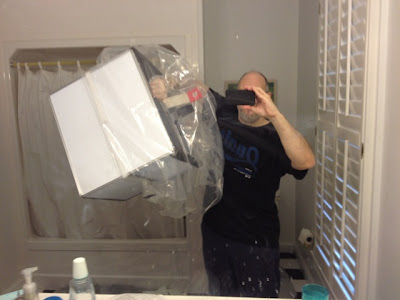 Various liquid deployment devices are attached to the inside with (you guessed it) Velcro. They are all out of the field of view of the camera. 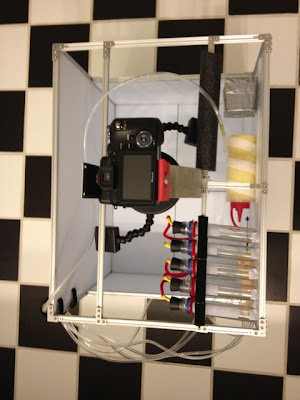 The main devices are Baby Soda Bottles from Steve Spangler Science. These are 2-liter soda bottle preforms, and are practically unbreakable. Each has a rubber stopper on the top that is secured to the bottle with a pipe-cleaner; they can be opened and closed with one hand. Each tube has a hole drilled in the bottom and a vinyl tube inserted into it; air entering the tube will eject the water from the bottle (I hope!) 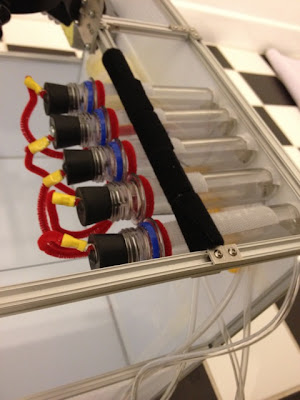 At the top of the device is a plenum that connects to all 5 test-tubes, with an input tube that I will hold in my mouth. When I puff, air will flow into any uncapped test-tubes. 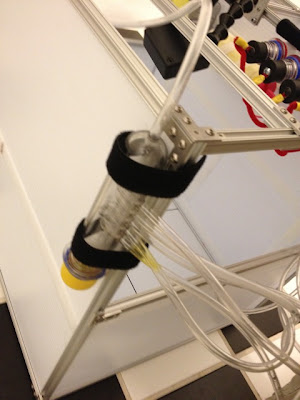 Also in the device are several other devices. I have two alternate water deployment devices, a foam cube (5 sides covered in duct tape) and a squeeze bottle filled with foam discs. I also have an agitator made from a Tamiya Submarine Mini Motor onto which I hacked an extended shaft. This will let me insert it into a water sphere and set up fluid flow. I will also (I hope!) be able to use it to insert a Mento into a sphere of Diet Tonic Water. 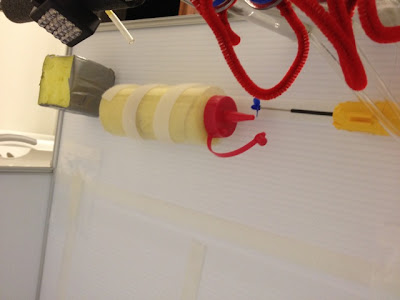 I still have a few tweaks to do to the device, but it's about 95% complete.

In addition to the high speed video, I am hoping to do several experiments that will form the basis for a set of educational videos for kids. My current list of experiments is:

Posted by MadOverlord at 6:25 PM